Vast mire tracts are a beautiful element of the Reserve's natural terrain. They occupy 507 km2 — almost 61,2 % of the site. The wild life of the protected marshland is really unique and diverse. In the entire European part of southern taiga such vast expanses of mires that have preserved their original state will not be found. Almost as many as two dozens of mire tracts connected by a ramified network of minor forest rivers and streams make up a single water and mire complex which is a unique natural creation. In the midst of vast marshland forest-covered islands stand out.

Dozens of centuries ago those were true islands washed by the waves of the glacial lake which is now buried under a layer of peat whose thickness may be as much as 7 m.

The Reserve's fens seem to have adapted to depressions and floodplains. They take water from underground and subsoil sources. The slightly convex bogs occupy the water divide and feed exclusively on atmospheric precipitation. There are also transition mires, which combine the features of the previous two. 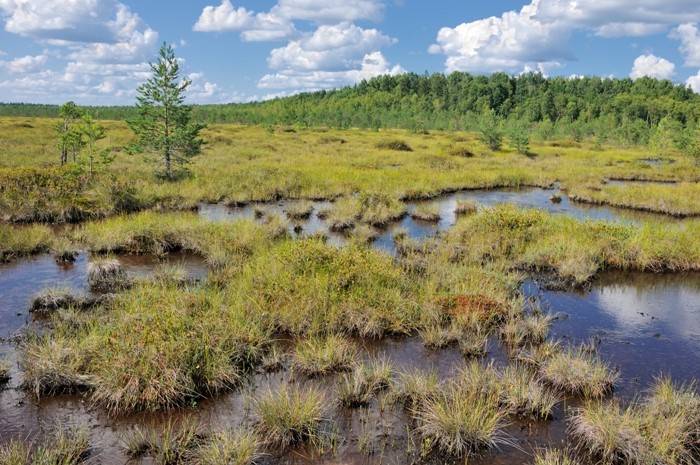 Bogs are covered with a dense downy carpet of sphadnum moss. In the fall cranberries appear like small fires on this multicoloured carpet. Close to them, on hillocks, one can come across sundew — an insect–eating plant. Its good neighbours are numerous shrubs such as ledum, andromeda, sweet gale, blueberry, crowberry. Each of them could make part of a marsh pharmacy with a whole set of various medicines. The Reserve's sphagnum mires boast of the dwarf birch — a rare arctic species. This is one of the south most points on the boundary of its geographic range.

Fens and transition mires are an entirely different world. They cover almost the whole of the Reserve's southern part. It is a kingdom of shady black alder and white birch stands. The trees grow in twos and in threes on high mounds. Next to them are willow, currant and buckthorn shrubs. Amid the mounds there is plentiful sedge and other marsh vegetation. Now and then there may be an open brown water duckweed-covered piece of quagmire. Any time of the year, except for very frosty winters, these places are practically impassable.

Recess sites of the Reserve are seldom visited by people, therefore they are an excellent habitat for wild animals and birds. Occupying half of the Reserve's territory, the mires contribute largely to its general status, terrain, flora and fauna peculiarities. It is thanks to the mires that the site has preserved its virginity and originality.