The Berezinskaya waterway system, a part of the former ancient Dnieper - Dvina waterway, was built in 1797 - 1805 by the Decree of the Russian Tsar Paul the First in which he entrusted Count Sivers, the actual privy councillor, to establish "a water communication between the Dnieper and the Western Dvina through the Berezina". In order to establish a through waterway they had dug out six canals.


The canals used to be rather complicated constructions. In low watery places their beds, 10 - 15 km wide on the bottom, 25 - 30 on the surface, lay across semi-embankments, the pressure dikes of which preserved adjacent locality from flooding. In the semi-embankments, which also served as roads, they made wooden frames with spillway dams for the water level controlling on both sides. 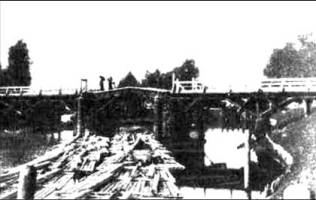 Fourteen locks kept the necessary depth to let ships through and to float wood. All the locks were single-chambered, their walls were sloping, faced with trimmed stone, their lower parts were vertical and fortified with wooden piles. The lock-gates and boxes were wooden, filled up with sand mixed with stone.

ix dams had been built on the Serguch, the Bereshcha, the Essa and the Ulla rivers to make water supply farther up-stream and to provide water escape in spring and during wet periods. They all had several spans with removable poles for letting ships through and floating wood. They had bridges for cartage passing as well. They had erected watch-boxes with household buildings in all waterworks.

In the southern branch of the waterway system they used to take water for locking from shallow watershed lakes (the maximum depth did not exceed 2 m). The lakes are the Olshitsa (282 ha), the Plavno (314), the Manets (111) and the Tecklits (202), linked with by the Serguch River. Lake Domzheritskoye (191 ha) and the water accumulated by the adjoining peat bogs served as additional basins. 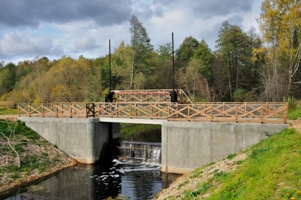 Creating the Berezinsky waterway was a significant piece of work of that time. They had been building it under hard conditions: among bogs, swamps and mud with the help of primitive implements such as spades, axes, and wheelbarrows. But as they say, the game was worth the candle, as the freights exchange between ports of the Baltic and the Black Seas became possible during one navigable season.

Nowadays, once busy waterway has lost its transport and floating purposes (wood floating ceased in 1950s). Wooden waterworks have been completely destroyed.

To maintain the hydrological rate of lakes and contiguous landscapes, historically formed after the waterway had been built, they constructed the reinforced concrete dams on the Serguch Canal near the villges of Kwetcha and Kraitsy, and the Connecting Canal near the village of Volova Gora, instead of the old dams and locks.